No more count down! Tonight is the night! 8 pm, Animal Planet !

Host and musician John Fulton, travels down the Pacific Coast Highway in search of crazy cat lovers. In Oregon he meets a woman who is on a crusade to teach kitties how to swim.

In San Francisco he visits a woman who designs jewelry out of her cat’s fur.

Thats ME! and Thats GAIA! 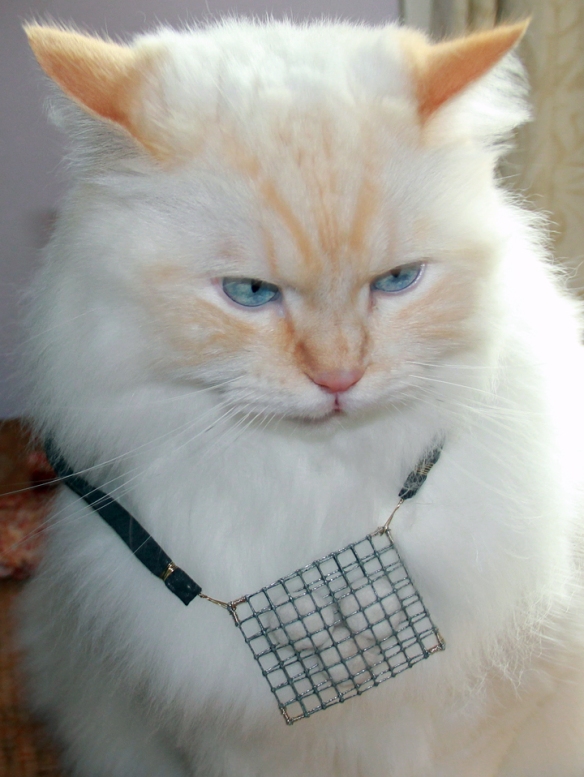 Or, that kneading thing cats do with their paws!

What IS he doing anyway?

We like to say he is making biscuits for our breakfast. Or, is he kneading dough, only to surprise us later with freshly baked raisin bread? What a clever boy! Hmm, only, we have never tasted the biscuits nor the bread. Oh well, I love watching him to his thing, purring sweetly too, and who knows, someday he may surprise us, in the middle of the night? with oven fresh croissants? That will be the day!

The buzz has definitely slowed on cat hair jewelry.

It has been over a year since my cat hair jewelry found its way to the internet. I have a steady stream of traffic to my Etsy site, not a lot, but more than previously.

So, what to do? … Try a little advertising! I chose Catsparella. I like the site, it is all about cats and the ad won’t put me in debt. First step—revamped my Etsy site to showcase just cat hair jewelry. Then, make the ad. That was the hard. I wanted a binky ad and I never made one before. After “googling” how to make an animated image, then fooling around in Photoshop — voila! — a few hours later, I had my ad!

And the traffic? it has picked up, still not a lot, but it is a beginning!